Triangle Of Sadness Review: A Biting And Hysterical Satire [Cannes] 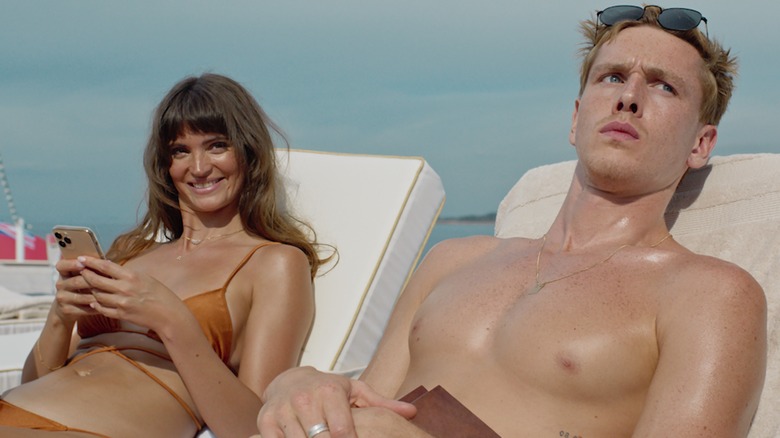 “Tringle of Sadness” is an utterly hilarious satire told in three acts, each more ludicrous than the last. For his English-language debut, Ruben Östlund brings together a fantastic ensemble cast to tell a story with biting commentary on class that explodes into absolute chaos. Though the film is a bit too long and peaks a bit in its second act, this could become this year’s big social-commentary film that gets horribly misinterpreted by Hollywood types, even if Östlund spells out the message several times during the film’s two-and-a-half-hour runtime.

Ruben Östlund has made a career out of comedic films aimed at making the audience incredibly uncomfortable while confronting societal roles and spaces of privilege, with hits like the ski-resort black comedy “Force Majeure” or the art world satire “The Square.” For “Triangle of Sadness,” Östlund looks at the world of male fashion — the title refers to the space between the eyebrows and the bridge of the nose, and how often it is “fixed” with Botox — and the uber-wealthy. It’s part disaster film, part survival thriller, and all laugh-out-loud satire. 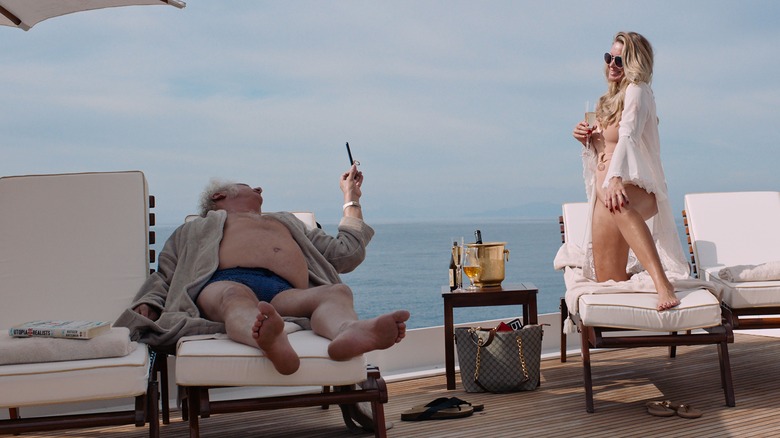 The first act centers on the world of male fashion, perhaps the one industry where men have it worse than women. We follow Carl (Harris Dickinson) and his girlfriend/influencer business partner Yaya (Charlbi Dean) during a huge argument over dinner and whether she should offer to pay the bill. According to Carl, it is not about her making more money than him, but about him being such a feminist he wants to avoid the traditional role of the male provider. Apparently, the whole exchange and subsequent fight were inspired by a real argument that happened while at Cannes between Östlund and his now-wife, and you can see that on the screen, with the dialogue and framing feeling hyper-realistic even as it becomes overly absurd.

Indeed, like every joke in the film, the argument is extended to the point where it becomes uncomfortable to keep watching, and you want to just move on to the next scene. Östlund and cinematographer Fredrik Wenzel hold the camera for as long as humanly possible, making the audience as uncomfortable as the characters before revealing the punchline.

For act two, the dynamics change, with the two models/influencers getting invited to a yacht for the rich, a place so obscenely wealthy (the Christina O) that the all-white crew ends a daily meeting chanting “Money! Money!” while those working below deck (all people of color) are neither seen nor heard. During this act, Östlund keeps the camera mostly static and in medium-wide shots, slowly building tension and mixing influences from everything from “Titanic” to “Parasite” and Jordan Peele’s “Us” for chaotic and delightfully gross results. 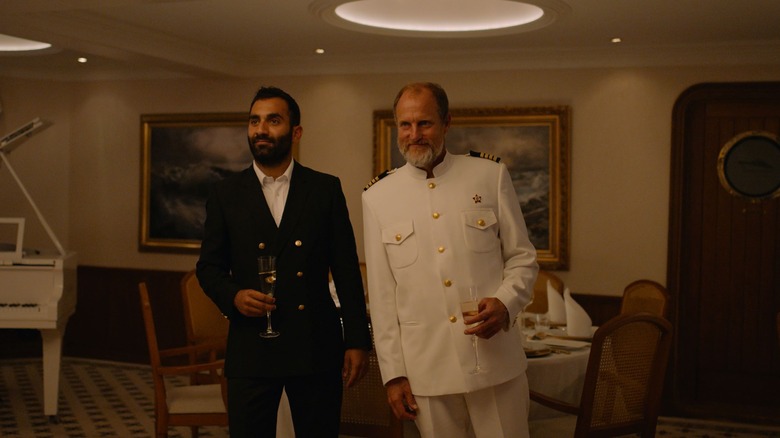 The ensemble cast here includes Zlatko Burić as a hilarious Russian oligarch who made his fortune in fertilizer, likes to call himself the “king of s***,” and walks around openly with both his wife and his mistress side by side, a rich Swedish programmer here to check out all the girls (Henrik Dorsin), and maybe a kind old weapons-dealing couple or two. If part one is a continuation of the themes of postfeminist masculinity from “Force Majure,” then this is the logical follow-up to how “The Square” explored the inaccessible and obscene world of class and privilege.

Without a doubt, however, the standout performance comes from Woody Harrelson, who plays the Marxist captain of this stupidly lavish yacht. Harrelson spends most of the movie drunk off-camera (to the point where I actually thought he was never going to show up) and then fighting with the Russian oligarch over the merits of socialism, and maybe causing a drunken panic on board for laughs.

Though the film loses a bit of steam in its third act, it remains biting and funny throughout, as Östlund keeps inverting and reinverting societal roles to keep the audience on their toes, while delivering some delicious social catharsis. “Triangle of Sadness” marks a fantastic English-language debut for Östlund, a movie that offers biting social commentary, some laugh-out-loud and gross moments of chaos, and one hell of a performance from Woody Harrelson. This is also a movie you want to see yourself before the celebrities watch it and take away the wrong lessons.

“Triangle of Sadness” premiered as part of the Cannes Film Festival 2022.

Read this next: Horror Roles That Changed Actors Forever

The post Triangle of Sadness Review: A Biting And Hysterical Satire [Cannes] appeared first on /Film.