How reality is shaped by the speed of light 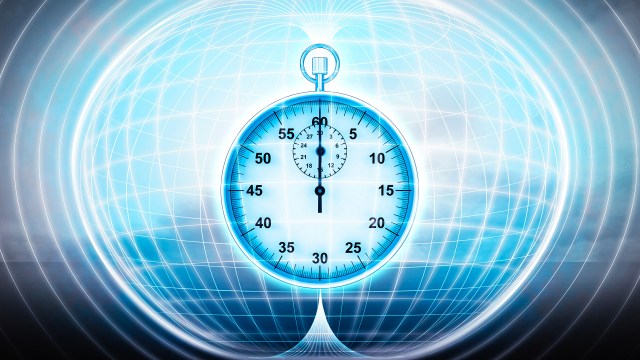 The launch of the James Webb Space Telescope has made me a busy guy. The amazing new pictures of galaxies at the edge of the Universe has led a couple of news organizations to keep flipping to my card on their rolodexes. (Yes, I know no one uses rolodexes anymore.) And almost every time I appear on a show, the hosts ask me about how we actually look back in time when we view these distant objects. I really love it when this topic comes up, because while it might seem like it pertains only to cosmology or astrophysics, it actually reflects a profound truth that everyone lives with, right here and now. That’s because you, me, and everyone else are all trapped in time.

Light from the time of the dinosaurs

When you look at a picture of a galaxy that is 75 million light-years away, you are not seeing it as it is right now, but as it was when that light you are seeing left it 75 million years ago. That means you are seeing that galaxy at a time when dinosaurs ruled the Earth, and you were nothing but a dream in the tiny mind of the tiny mammals that existed back then.

I think everyone is familiar with this idea, and it is mind-blowing enough that everyone is happy to explore it again each time an image of a distant galaxy is released. Distance translates into time because the speed of light is finite. Therefore it always takes some time for light to cross the distance between a galaxy and your eye. A galaxy 75 million light-years away has had 75 million years to evolve since that light left and may no longer look like what we see in the image. That is incredible. (Actually, 75 million years is not enough time for galaxies to evolve much. Galaxies 10 billion light years distant are, however, another story).

So yes, everyone loves this idea. But here is the thing. You don’t need objects to be billions, millions, thousands, or even one single light year away to experience how distance translates into time. It is a constant part of your life. You are trapped in time.

Consider an object sitting two meters away from you. Look up now, find one, and focus your eyes on it. Let’s say it’s a chair. Because the speed of light is 2.99 x 108 meters per second, the light your eye is detecting left that chair exactly 660 picoseconds ago. A picosecond is one trillionth of a second, and while I will grant that 660 trillionths of a second ago is pretty recent, it is still in the past. You are not seeing that chair as it is now, you are seeing it as it was. The same is true for everything else your eye detects. You never ever see the world as it is.

But it gets weirder.

The light from the table sitting just one meter away from you is also taking some time to reach you. Since its half as far away as the chair, you are seeing it as it was 330 picoseconds ago. That’s half as far back in the past as the chair. Ok, fine, but they both appear to you in the now. What you perceive as the “now” is really layer after layer of light reaching your eye from many different moments in the past. Your “now” is an overlapping mosaic of “thens.” What you imagine to be the real world existing simultaneously with you is really a patchwork of moments from different pasts. You never live in the world as it is. You only experience it as it was, a tapestry of past vintages.

Chairs, tables, houses, the moon, the stars, and the Milky Way. They are all living in different pasts, but when you stand in their assembled midst, they make up this fleeting moment of your life. How could something so real be built from such a potent illusion?

The post How reality is shaped by the speed of light appeared first on Big Think.